Attar of Nishapur was a Persian poet, mystic, philosopher, and Sufi who is said to have lived between c. 1145 – c. 1221. However, his exact date of birth is not known. He was born in the city of Nishpur which is now the north-east of Iran. He had a great influence on Persian literature and mysticism. His full name was Abu Ḥamid bin Abu Bakr Ibrahim, also known as Farid ud-Din.

Attar means “herbalist” and this nickname was given to him due to his profession. He is said to have prescribed herbal remedies to his patient and written his poems while attending to his patients.

His national commemoration day is on April 14th (the 25th day of the first month of the Solar Calendar). Attar traveled extensively, seeking wisdom in Egypt, Mecca, Damascus, India, and other regions, before finally returning to his birthplace Nishapur.

It is said that Attar was a friend of Baha al-Din Valad, Rumi’s father, and on an occasion has met Rumi as a child; he admired and acclaimed him and gave Rumi his work “Asrar-Nama” which means “The Book of Secrets”.

About thirty works of Attar has survived, among them is his masterpiece “The Conference of the Birds” (Mantiq-ut-Tayr). In this poetry book, he describes a group of birds (representing human souls) that choose a Hoopoe (spiritual master) as their leader and decide to search for the legendary bird called “Simurgh” (representing the ultimate reality or truth) who lives on “Qaf” Summit.

These birds must confront their fears and limitations on their journey and cross seven valleys to finally reach Simurgh and complete their quest. 30 birds after completing their quest find out that they themselves are the Simurgh they were searching for. The word Simurgh plays a pun in the Persian language (“Si” meaning “thirty” and “Murgh” meaning “Bird”, together meaning “30 birds”) while giving us esoteric teaching that the Divine is within us all. 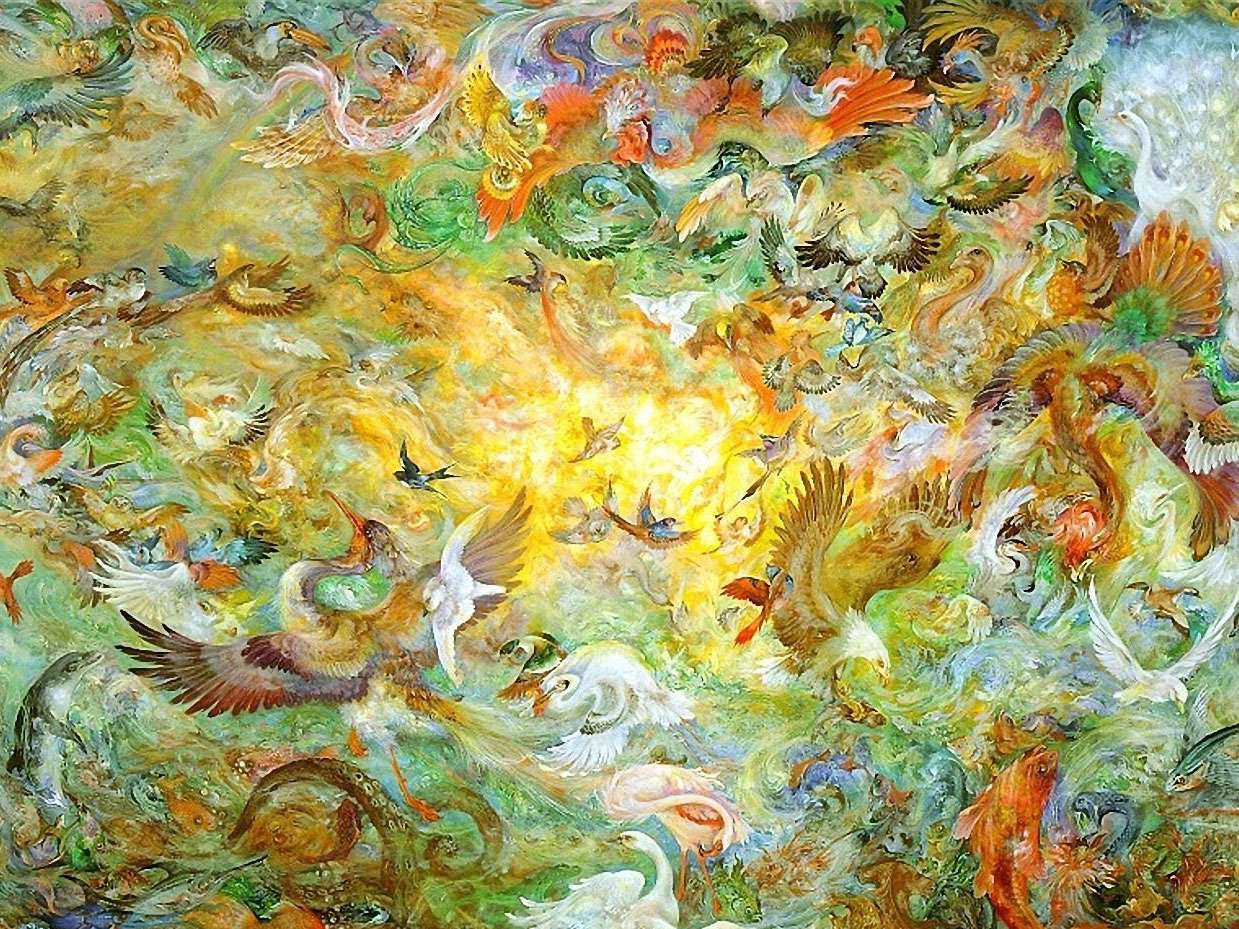 * Persian Miniature Painting of “The Conference of the Birds”

It is said that Attar was imprisoned and killed by the Mongols but stuck to his principles. It teaches us that we should not turn back from what we believe even if we are threatened by the death of the body.

Below is the translation of some of his precious verses from the Persian version of Attar’s book Mantiq-ut-Tayr or The Conference of the Birds:

Because Simurgh and his shade are not apart / If you say they are, it is not admissible

You will see the shade lost in the sun/ And see yourself as the sun, that is all”

Rumi praised Attar regarding his influential and high position among Persian poets and mystics; he says “Attar explored the seven cities of love/ we are still on the bend of one alley”