Love these feathery creatures as much as we do?

Check our tour packages and choose your favorite

Birdwatching or birding is one of the branches of ecotourism in which to observe birds in wildlife.  It can be done with the naked eye, through a binoculars and telescope or by listening to the birds sound.

Iran is located in West Asia and borders the Caspian Sea, Persian Gulf, and Gulf of Oman.

The most important countries in the Middle east as it’s biodiversity is Iran and this country is a suitable destination for those with a curious spirit of birdwatching. There are endemic and rare birds, and species which are worth seeing. As Iran is a country with variety of climates and various ecosystems that allows inhabiting of some different species of birds. Iran due to extensive climate contradictions has created favorable habitats for the establishment of diverse plant and animal species. Also, the existence of regions such as Caspian, desert, mountainous and tropical area of the Persian Gulf has provided a variety of habitats, which has added to the biodiversity of Iran.

In this vast country, 550 birds have been identified and reported until now. Iran hosts approximated 2/3 of the Middle East birds, it makes possible to go birding in this big and little-known country with special birds in these habitats. Therefor “Iran” can be the best potential source for experienced ornithologists and new birders.

We organize Birdwatching Tours that cover all of Iran, from the rain forests of Hirkani in the north to the Minab palm gardens and the Mangrove forests in south, altitudes range to desert areas. These tours are also remarkable tours for photographers especially who does bird graphy. With a variety of birds in Iran you can add new beautiful birds photo to your checklist. If you wish to experience birdwatching of rich biodiversity country, plan to visit the different habitats of Iran. 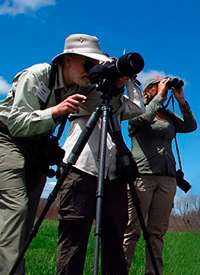 This birdwatching tour package is specifically planned for the winter season in the South of Iran. The southern region of Iran is definitely one of the most popular birding destinations.…

One and a Half Day Varzaneh Astronomy Tour