The history of this city goes back to 7 thousand years ago and has a unique style of architecture. You can see this architecture by visiting the historic buildings that are open to the public. The most prominent point about this city is that this town has many historic and traditional houses which you can book through Hogo Travel. In addition, these accommodations enjoy all the modern facilities such as Tv set, Wi-Fi, air conditioning, and so on.

Kashan is a desert city and is well-known for making rosewater. Therefore, Kashan and especially Qamsar which is the center of rosewater production hosts many tourists from different parts of the world during the rosewater-making season. The traditional atmosphere, historic hotels, and herbal drinks (extractions) have made Kashan a popular destination for tourists. 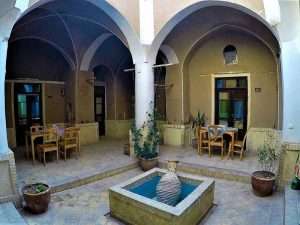 Kamalalmolk Guest House is located in the historical city of Kashan and the building belongs to the Qajar period which was restored in 2013 and is 185 years old. This complex is inspired by the crafts, customs, and traditions of the people of this desert region and was built according to the rich Persian architecture. This accommodation consists of two parts and 10 units, central courtyard and springhouse courtyard. 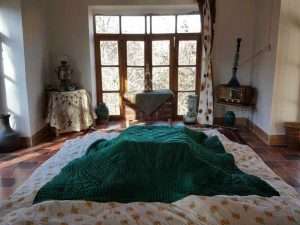 Kushke Aqa Mohammad was built in 1951, by Mohammad Eftekhar in the city of Qamsar in Kashan. Materials used in the building such as clay, soil, and wood are all from this region. The terrace is well decorated and it has a long porch and wooden roofs. Freshwater flows through the garden, next to the house, which has magnificent architecture that shows the craft of the architect. 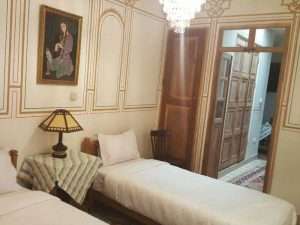 This historic building is amongst the ancient houses in the center of Darb-e Bagh neighborhood was recorded as a National Heritage in the year 2005. The history of the building goes back to the middle of the Qajar era.  It has three separate yards, the courtyard, front yard, and staff’s yard. Mahinestan Raheb was later restored under the supervision of the master of Persian architecture Akbar Helli.

Raheb house is considered one of the most luxurious historic houses in Iran. The combination of the latest facilities and the historic atmosphere would bring you an unforgettable stay. 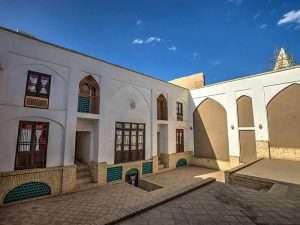 Negin Traditional House is located inside the historic district of Kashan. This building was restored and opened in 2013. This complex has a complete traditional Iranian atmosphere and is equipped with the latest facilities in the world. In addition, the guests can easily go to the tourist attractions and can be catered by various traditional foods. Some of the rooms are on the upper floor and have stairs.

The double room of the cellar has 4 steps and the quad room has 10 steps going downwards. The closeness to the Mohtasham Kashani Tomb, Grand Bazaar, Alavi Street, and downtown are some advantages of this house. 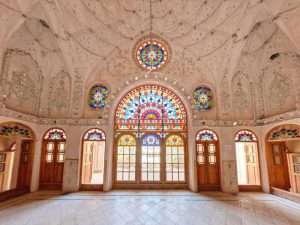 In an attempt to restore a part of Kashan’s local structure, a capable and professional team began restoring Ameriha House In 1999. They took great care and attention to restore this unique house based on its original form and designs and the project was finished in 2014. This hotel is a 5-star hotel and has two restaurants, a coffee shop, fifteen rooms, and a gallery, and it is classified as a boutique hotel. 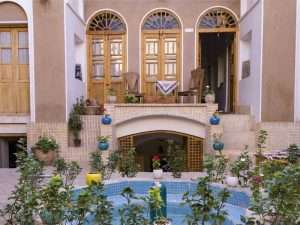 Saraye-e Sayeh is a historic house that was mainly built during the Qajar Period and some parts were later appended during the Pahlavi Era. The history of this complex goes back to 200 years ago, then it was restored in 1396 and became open to the public. Saray-e Sayeh has 6 rooms which are spread between the ground floor, first floor, and basement. This traditional house has easy access to some of the main attractions of Kashan such as the Agha Bozorg Mosque, Abbasi House, and historic Sultan Amir Ahmad Bathhouse.

In order to maintain the traditional architecture, and conveying a nostalgic feeling the rooms don’t have TV sets. If you are seeking a way to escape from modern life this would be an ideal place. 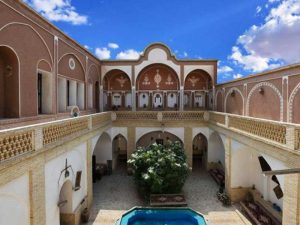 Sadeghi House Hotel is located in Kashan’s historic district near Abbasi and Taj historical houses. Sadeghi Traditional Hall was built in the Qajar era. The features of this house such as a pleasant atmosphere, beautiful stucco, various rooms, and colorful glass in the windows of the rooms, make it unique from other traditional houses in Kashan.